Divergence in drought conditions across the Corn Belt

As of Aug. 9, 66% of the U.S. was experiencing abnormal dryness/drought, according to the U.S. Drought Monitor, unchanged from the previous week. Drought conditions improved across the northern and eastern Corn Belt over the past week, while they worsened in western and southern areas.

For the Midwest, the Drought Monitor commentary notes: “Currently, drought is most prevalent in west-central and southwestern parts of the Region, in southern Iowa and much of Missouri. Much of southern Minnesota is also experiencing at least some notable degree of dryness. East of the Mississippi River, dryness and drought cover less area, but small areas of D1 can be found in northern Wisconsin, east-central Michigan, and in a swath extending from east-central Illinois into west-central Tennessee. Like many other parts of the country, some areas were soaked with rain, while others received little or none, creating a complicated pattern of deterioration and improvement. In this Region, substantial rainfall and improved conditions were noted in many extant areas of dryness and drought, including most of the southern half of Missouri, northern Iowa, central Minnesota, and areas east of the Mississippi River. One notable exception to the generally improving conditions was across the southern half of Iowa and the northern half of Missouri. This area was largely dry last week, with above-normal temperatures, abetting expansion and intensification of the dryness there. Over the past 60 days, less than half of normal rainfall has dampened much of the southern half of Iowa and central Missouri. In contrast, areas east of the Mississippi River received near or above normal rainfall, with much of southern Illinois soaked by 1.5 to 3.0 times normal rainfall during this period.”

Across the Plains, the commentary noted: “Most of the Great Plains recorded only a few tenths of an inch of rain at best last week, as did most of North Dakota. Rainfall was more abundant in central and southern Colorado, and in a swath across much of Wyoming and South Dakota. Totals of 0.5 to 2.0 inches were common in these areas, with isolated higher amounts of 2 to 5 inches soaking northwestern Wyoming, scattered areas in central and southern Colorado, and portions of central and eastern South Dakota. Fairly large areas of heavy rain were noted in south-central and parts of eastern South Dakota. Not surprisingly, parts of the wetter areas saw dryness ease somewhat while hot and dry conditions from eastern Wyoming and Nebraska southward promoted large areas of expansion and intensification there. In the last 60 days, much of this area received 35 to 65 percent of normal rainfall, but most locations recorded more. Periods of excessive heat have exacerbated the effects of the subnormal precipitation, and even some areas with near normal rainfall have seen conditions dry out due to the heat. Surface moisture shortages are now most acute in western Kansas and southwestern Nebraska, and a sizeable part of this area is in exceptional drought (D4), with the remainder in D3 along with northeastern Colorado, southeastern Kansas, northwestern Nebraska, and a newly-developed area in central South Dakota. Only the central and northern Dakotas, northeastern Kansas and adjacent areas, portions of the Colorado mountains, and part of central and northern Wyoming are largely devoid of drought, though abnormal dryness has been identified in some of those areas.” 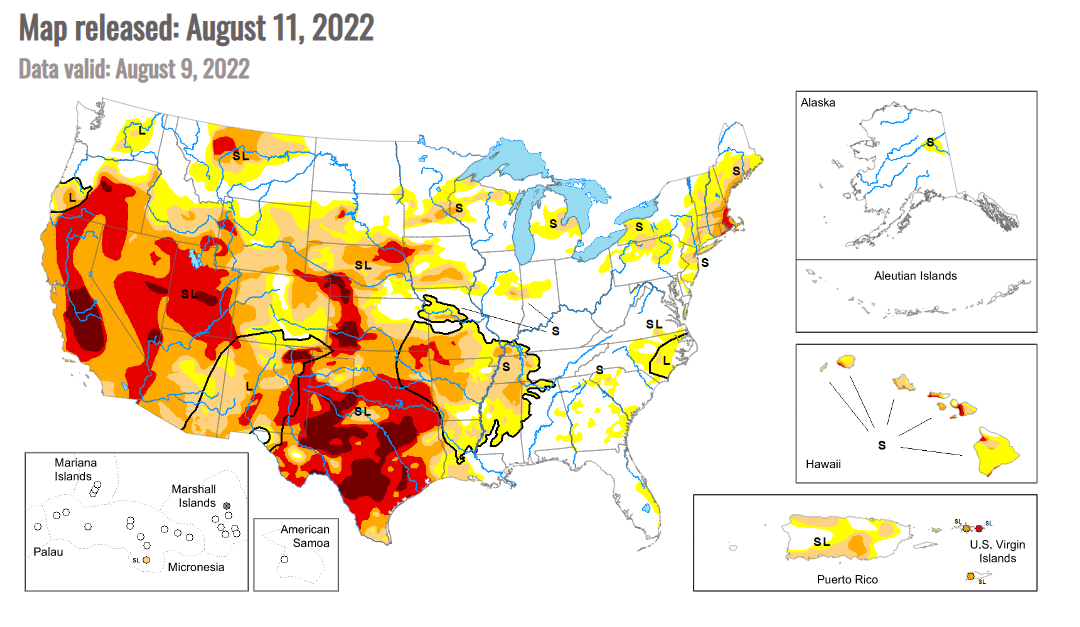 Sharp drop in cash corn and soybean prices over the past week.

Sharp fluctuations in some of the world’s major currencies are injecting new uncertainty into the global economic outlook.