Mild drought degradation in West Texas, improvements in other areas

The U.S. Drought Monitor as of Oct. 19 showed some drought improvement in areas of the Southern Plains, but there were areas in West Texas that saw a one-category degradation in drought conditions during the week.

The Drought Monitor commentary notes: “Following rapid expansion of D0 (abnormal dryness) and D1 (short-term moderate drought) during September across Oklahoma and northwest Arkansas, above normal precipitation during the first half of October resulted in a continued decrease in the coverage of D0 and D1. Month-to-date rainfall amounts totaled 2 to 6 inches throughout much of central and eastern Oklahoma along with northwest Arkansas. Farther south into central Texas, recent heavy rainfall also supported minor modification to the ongoing D0 and D1 areas. Abnormal dryness (D0) was maintained for parts of southeast Oklahoma due to ongoing 30 to 60-day indicators and lower rainfall amounts during the past two weeks. Abnormal dryness (D0) and short-term moderate drought (D1) was expanded slightly to include more of southwest Arkansas and northwest Louisiana which missed out on the heavier rainfall this past week and precipitation deficits have increased. Moderate (D1) to severe (D2) drought continues to expand across west Texas where 60-day precipitation deficits range from 2 to 5 inches and soil moisture indicators have worsened.”

For the High Plains, the commentary said, “Widespread precipitation (1 to 3 inches, liquid equivalent) since 12Z on Oct 12 prompted a large 1-category improvement across the Dakotas and an adjustment to only show long-term drought impacts for much of the northern Plains. Excluding the northwest corner of North Dakota, 14-day precipitation amounts have totaled 2 to 6 inches. Extreme drought (D3) remains across northwest North Dakota, based on long-term SPIs and soil moisture below the 5th percentile. Improvements were also made across parts of Nebraska and Kansas due to weekly precipitation amounts of greater than 1 inch and soil moisture recovery. Likewise, an increase in soil moisture indicators resulted in small improvements across parts of Wyoming.”

Across the Midwest, the Drought Monitor stated, “Recent rainfall and improving stream flows resulted in a 1-category improvement to parts of western and northern Minnesota, while insufficient precipitation during the past 30 days prompted an expansion of abnormal dryness (D0) from southeast Minnesota into parts of Wisconsin. Rainfall during mid-October resulted in a slight decrease in the southern extent of D0 and D1 areas of northern Illinois. Also, the spatial extent of D0 was decreased in Missouri based on 30-day precipitation and improving streamflows. SPIs at various time scales, 28-day average streamflows, and soil moisture remain near or above normal throughout the eastern Corn Belt and Ohio Valley.” 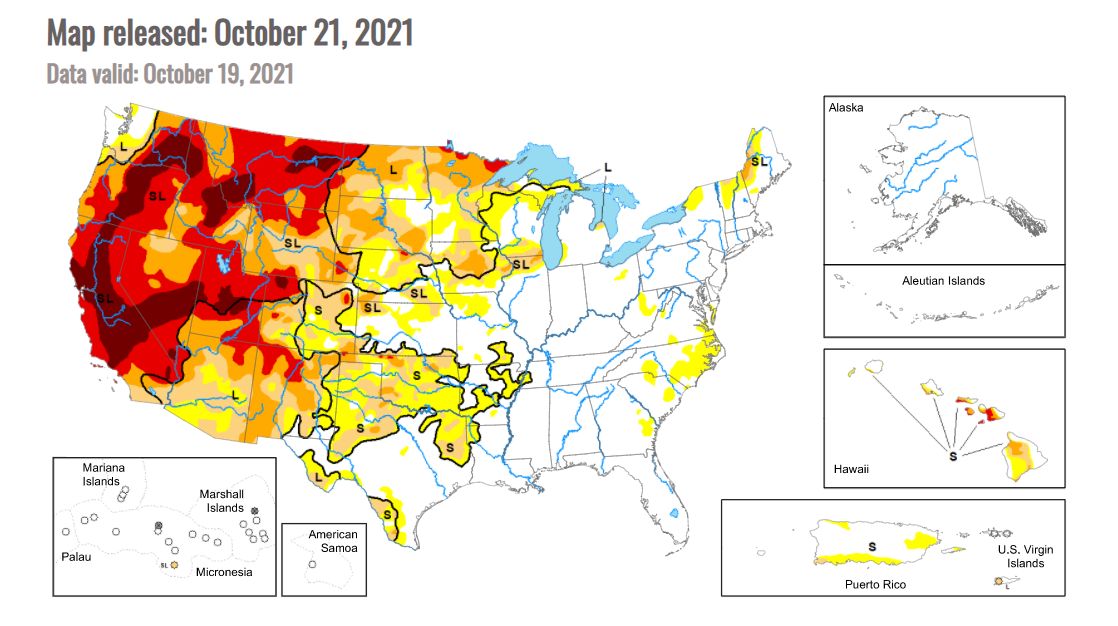 Grain and soy complex futures were part of a broader selloff overnight.

The HRW CCI rating is 7.8 points below the five-year average, the SRW rating is 13.5 points under the end-of-fall norm.

Corn and wheat futures are lower to start the week as soybeans firm. Cattle futures are mildly firmer and lean hogs are mixed...