The House on Friday will vote on the Senate-passed reconciliation measure dubbed Inflation Reduction Act (IRA). We have a summary of the measure in the Policy section, but on Sunday filed a major update on the bill.

China isn’t done with its aggressive drills near Taiwan. The Chinese military said Monday it would conduct new actions in the air and sea near the self-ruled island, which China claims as its own.

Time to take a look at the Fed’s balance sheet.

Ag markets today: Wheat futures led losses in the grain markets overnight, while corn and soybeans posted lesser declines. As of 730 a.m. ET, corn futures were trading around 6 cents lower, soybeans are around a penny lower and wheat futures were 8 to 12 cents lower. Front-month crude oil futures were nearly $1.50 lower and the U.S. dollar index is down about 225 points.

A look at the Federal Reserve’s balance sheet tightening. When the central bank began quantitative tightening, or QT, in June, it set out to partially unwind roughly $4.5 trillion in quantitative easing, or QE, that was conducted in response to the pandemic. The Fed started by letting up to $30 billion in Treasuries and $17.5 billion in mortgage-backed securities, or MBS, roll off its balance sheet, as opposed to reinvesting the proceeds. Barron’s notes that starting next month, those caps will rise to $60 billion and $35 billion, respectively, meaning the pace of balance-sheet runoff is about to double. Fed Chairman Jerome Powell has suggested that QT would go on for two to 2½ years, implying that the Fed’s $9 trillion balance sheet would shrink by roughly $2.5 trillion.

Ed Yardeni, president of Yardeni Research, says QT will represent the equivalent of at least a half-point rate hike, and probably closer to a full-point increase. That’s not to mention the impact of a 10% run in the U.S. dollar this year, which Yardeni says is equal to another hike of at least 0.5%.

Concludes Barron’s: “The Fed is entering the unknown, and so are markets.”

Fed governor sees more big rate hikes. The Fed is relatively fresh off its second consecutive three-quarter point rate hike, but expect more to come, according to Fed Governor Michelle Bowman. “My view is that similarly sized increases should be on the table until we see inflation declining in a consistent, meaningful, and lasting way,” She said in remarks over the weekend. Bowman, a voting member of the central bank’s rate-setting Federal Open Market Committee, said high inflation is a bigger threat to the economy than slowing growth. If prices continue to surge like they’ve been doing over the past few months, she said, it “could lead to a further economic softening, risking a prolonged period of economic weakness coupled with high inflation, like we experienced in the 1970s.”

• NWS weather: There is a Slight Risk of excessive rainfall over parts of the Southwest, Midwest, eastern Tennessee/Ohio Valley and Northern New England through midweek... ...Dangerous heat across parts of the Pacific Northwest, Middle Mississippi Valley, Central Plains, and Northeast Coast... ...Critical fire weather danger across portions of northern California and the Pacific Northwest due to hot and dry conditions. 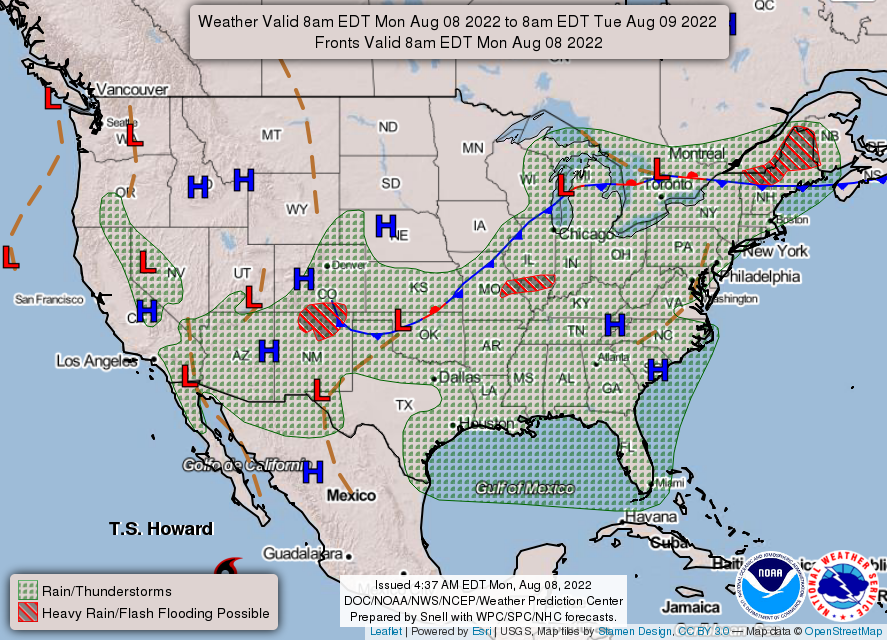 — Summary: Volodymyr Zelenskyy, Ukraine’s president, accused Russia of engaging in “nuclear terror” by shelling the Zaporizhzhia nuclear power plant in southern Ukraine. Russian forces said the artillery fire had in fact come from Ukrainian soldiers. The shelling damaged three radiation sensors and wounded one worker, according to Ukraine’s nuclear-power operator. The U.N.’s nuclear watchdog implored both sides to give international monitors access to the site.

— Senate Democrats voted to pass, 51 to 50, the $740 billion, 755-page tax, climate and health care reconciliation package that most say will not or barely live up to its name: Inflation Reduction Act. The nonpartisan Congressional Budget Office said the bill would have a “negligible” effect on inflation this year and into 2023. Democrats successfully blocked most GOP amendments. In the vote-a-rama that began Saturday and stretched late into Sunday afternoon. We released a special report (link) Sunday on the details of the package. Next step is a House vote Friday and it is expected to pass and be sent to the White House where President Joe Biden will sign it into law.

To finance much of the plan, the measure would raise over $700 billion in gov’t revenue over 10 years. It would institute a new 15% corporate minimum tax that would apply to the profits that companies report on their financial statements to shareholders, known as book income. It would impose a new 1% tax on corporate stock buybacks beginning in 2023. The measure also would pour $80 billion into the IRS to hire 87,000 new employees to boost the agency’s enforcement arm and crack down on wealthy corporations and tax evaders. That provision is estimated to raise $124 billion over a decade.

Climate change provisions: The bill allows roughly $374 billion in climate and energy spending such as expanded tax credits for renewable energy projects. It has several provisions to boost electric vehicles, but some observers note the constraints on EVs: income thresholds to the EV credits and limits on where the vehicles can be manufactured, another demand meant to make sure these vehicles are largely produced in the U.S., but one that means the credits might not be available for a few years. Rhodium Group, an independent research firm, estimated that the bill would cut greenhouse-gas emissions 31% to 44% below 2005 levels in 2030, compared with 24% to 35% under current policy. To maximize the benefit of some incentives, clean energy projects would have to pay the going rate for similar jobs in the local area and hire apprentices from government-run programs. Subsidies for building facilities and buying equipment or other technology would have to source U.S.-made steel and iron. As part of Democrats' concessions to Sen. Joe Manchin (D-W.Va.), the bill contains provisions calling for offshore oil lease sales in the Gulf of Mexico and off the coast of Alaska, and a commitment to take up a separate measure to ease the permitting of new energy projects.

* The $1-a-gallon tax credit for biomass-based diesel would be extended through 2024 and then replaced by the clean fuels tax credit that would vary according to the biofuel’s carbon rating. A temporary $1.25 per gallon tax credit would be created for sustainable aviation fuel (SAF) to serve as a bridge to the implementation of the clean fuels credit in 2025. The new clean fuels credit would be in effect through 2027. There is some discussion about the SAF language and whether that includes soybean oil.
* Infrastructure: Funding for blender pumps and other biofuel infrastructure.
* Roughly $2 billion for USDA's Rural Energy for America Program, which funds renewable energy and energy efficiency projects.
* $9.7 billion in assistance to rural electric cooperatives for renewable energy and energy efficiency projects and another $1 billion in loans for renewable energy projects in rural areas.
* Rural electric cooperatives would get direct payments for the benefit of renewable energy tax credits. Electric co-ops now have to work with third parties to get such benefits.
* Forests: Over $5 billion for wildfire prevention and climate resiliency projects in public and private forests.

Democrats garnered major health care provisions which aim to lower the cost of prescription drugs but negotiations to aid Medicare recipients will not start for several years and face a limited number of drugs in a phase-in plan. Beginning in 2025, it would cap out-of-pocket drug costs for seniors enrolled in Part D at $2,000 per year, a policy that could help the approximately 1.4 million enrollees who hit that amount each year, according to the Kaiser Family Foundation. The measure would also impose a cap on drugmakers’ price increases, though Democrats had to scale back the inflationary cap when the Senate parliamentarian ruled that it didn’t adhere to Senate rules. The Senate parliamentarian spared drugmakers any penalties for increasing prices in the commercial market. Starting next year, the measure would mandate free vaccines for Medicare enrollees. Republicans succeeded in killing one provision that violated Senate budget rules. It would have capped the price of insulin at $35 a month in the private insurance market. The $35 insulin cap for Medicare beneficiaries remains in place., and the $35 insulin cost cap for commercial health plans was removed.

Other ag sector provisions include:

Meanwhile, talks with the U.S.  on several topics (climate change, military/defense and anti-drug efforts) were halted following the visit of House Speaker Nancy Pelosi (D-Calif.). China acted because Pelosi visited Taiwan “in disregard of China’s strong opposition and serious representations,” the foreign ministry said in a statement. China has claimed that Pelosi’s visit to Taiwan amounts to an attack by the Biden administration on Chinese sovereignty. The White House has stressed that Pelosi is the head of the legislative branch of government and that it could not stop her visit. The White House also has said Pelosi’s visit does not signal a shift in its one-China policy, which acknowledges that Taiwan is part of China. “China has chosen to overreact and use the speaker’s visit as a pretext to increase provocative military activity in and around the Taiwan Strait,” National Security Council spokesman John Kirby told reporters at the White House on Thursday.

— The China maneuvers, experts said, suggested a plan to blockade Taiwan, which is “quite a bit more than we’ve seen before,” said Andrew Mertha, director of the China Global Research Center at the Johns Hopkins School of Advanced International Studies. “We’re seeing what China is capable of doing in a war context.”

Bottom line: China touted its military exercises around Taiwan as proof it can blockade the self-ruled island in the event of a war.

— China announced new military drills around Taiwan on Monday, contrary to its previous statement that live-fire exercises would conclude on Sunday. China also announced fresh drills, to last until August 15, in the Yellow Sea, which separates it from the Korean peninsula.

— A RAND Corporation report (pdf) estimated that a one-year war between the U.S. and China would cut 5-10% off U.S. GDP and 25-35% off Chinese GDP. Foreign demand makes up around 15% of China’s GDP; if other economies have to stop buying from China in the midst of a war, its citizens would face a long and difficult depression. 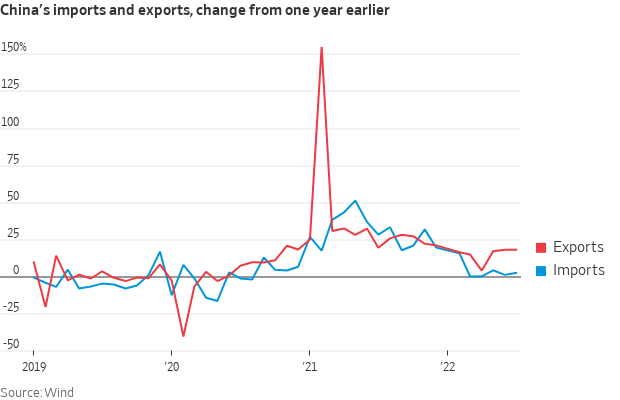 — Chinese soy imports slowed in July. China imported 7.9 MMT of soybeans in July, down 4.5% from June and 9.1% less than last year, as weak crush margins reduced demand from importers. Through the first seven months of this year, China imports 54.2 MMT of soybeans, down 5.9% from the same period last year.

— Chinese meat imports inch up but still down from year-ago. China imported 643,000 MT of meat during July, up 40,000 MT (6.7%) from June but 207,000 MT (24.7%) below year-ago. China doesn’t break down the categories of meat imports in its preliminary data, but the sharp year-over-year reduction was due to slower pork demand. Through the first seven months of this year, China imported 4.1 MMT of meat, down 30.9% from the same period last year.

— A Monmouth University poll shows Democrats gaining ground on the generic congressional ballot — another signal the party's fortunes may have improved over the last month. The poll finds Democrats with a 7-point lead on the generic ballot (50%-43%), up from a tie in the pollster's June survey. More Democrats (74%) said it was "very important" for them to vote than Republicans (69%). But President Joe Biden still holds an anemic 38% approval rating, largely unchanged since the June survey. Only 33% of independents approve of his performance.

— Indiana became the first state to pass a law restricting abortion since the Supreme  Court ruling that rescinded Americans’ constitutional right to the practice in June. The near-total ban will allow termination only in cases of rape or incest, to protect the mother’s health or if the fetus has a fatal abnormality. It will go into effect from September 15.

Sharp drop in cash corn and soybean prices over the past week.

Sharp fluctuations in some of the world’s major currencies are injecting new uncertainty into the global economic outlook.