Other Items of Note:
• NATO: still a diplomatic way out of the Russia/Ukraine crisis, but Biden talks sanctions

Equities today : Global stock markets were mostly firmer overnight. U.S. stock indexes are pointed toward solidly higher openings when the New York day session begins. Asian equities were mixed with an eye on the coming US Fed meeting conclusion. The Nikkei fell 120.01 points, 0.44%, at 27,011.33. The Hang Seng Index rose 46.29 points, 0.19%, at 24,289.90. European equities are seeing sizable gains in early action, with the Stoxx 600 up more than 2% and most regional markets also up 2% or more; the FTSE was up 1.8%.

FOMC meeting conclusion will likely include signals on Fed policy moves ahead. The Federal Open Market Committee (FOMC) meeting conclusion today and press conference by Fed Chairman Jerome Powell are main focal points for financial and equity markets as they seek additional signals from the U.S. central bank on its monetary policy plans ahead.

The Fed is expected to announce one more round of purchases of bonds, but ending that effort by March.

As for an increase in the target range for the Fed funds rate, market expectations are this will take place at the next FOMC meeting — March 15-16. The Fed may not outright signal that is the case, but if they indicate their dual goals on inflation and employment have been met, that will lead markets to conclude with even greater certainty a March rate rise is coming. Powell will be questioned several ways by reporters if he does not offer that concrete of a statement on the timing.

The next issue will be on when the Fed will start to pare its $9 trillion portfolio amassed during its bond buying efforts. Powell signaled in congressional testimony that effort would not commence until the Fed had started to increase the target range for the Fed funds rate and was far less committal on any specific timing relative to reducing the portfolio. But he will no doubt add the usual comments that there are uncertainties with the outlook relative to Covid and supply chains. Signals today will be key.

Recall that the Fed views its forward guidance as a monetary policy tool and that will be the tool of focus for today’s meeting conclusion.

Of note, Fed officials will update their forecasts for the US economy and monetary policy actions at the March FOMC session. At the December meeting, Fed officials signaled three rate increases this year and three more in 2023. Powell has been very clear in insisting that markets will not be surprised by coming Fed actions. Key today will be whether markets view his comments as surprising. 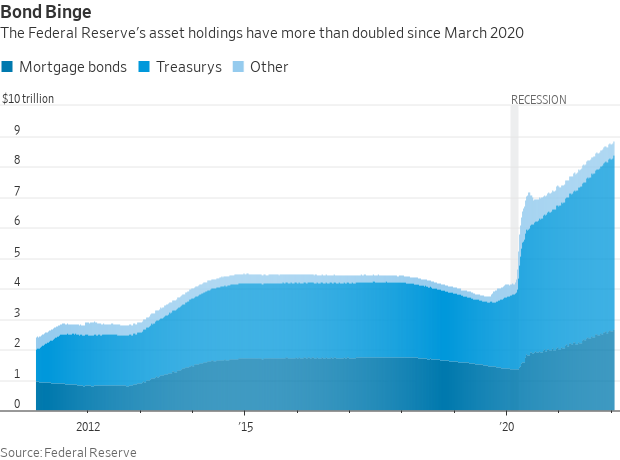 U.S. home-price growth decelerated in November as months of fast-rising prices pushed some buyers out of the market. The S&P CoreLogic Case-Shiller National Home Price Index, which measures average home prices in major metropolitan areas across the nation, rose 18.8% in the year that ended in November, down from a 19% annual rate the prior month. Intense competition for a limited number of homes on the market has pushed prices to record highs. 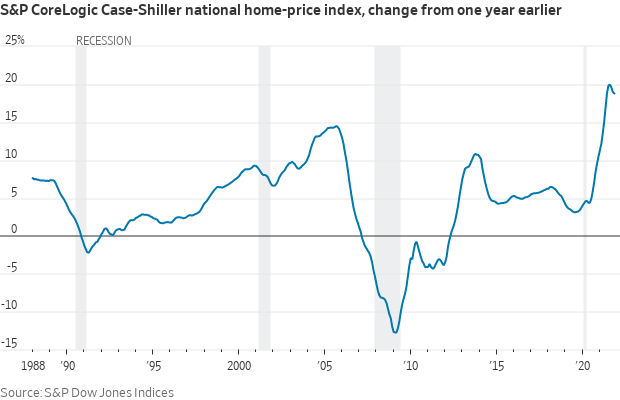 Nation’s busiest container-port complex is showing signs of supply-chain fatigue. Import volumes at the ports of Los Angeles and Long Beach slumped 14% in December, the Wall Street Journal notes (link), even as the lineup of vessels waiting to unload at the gateway stretches to more than 100 ships. Loaded container imports tumbled to the lowest monthly level since June 2020 and fell year-over-year for the fourth straight month. Shipping industry experts say strained handling operations across the region may have hit a wall after running at a breakneck pace since the summer of 2020. The ports also face growing competition as importers look to get around the key supply-chain chokepoint. Container volumes at East Coast ports are growing, and hopes for a fresh start to 2022 for Los Angeles-Long Beach have been met by a new, bigger wave of Covid-19 cases among dockworkers. 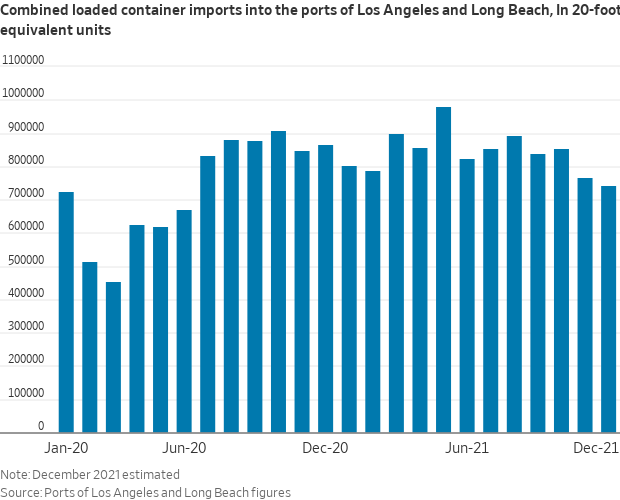 U.S. manufacturers and other companies are down to less than five days of inventory for key chips, raising concerns that any disruption in deliveries would rapidly cascade across manufacturing supply chains. The U.S. Commerce Department issued the report based on surveys that showed companies typically maintained 40 days of inventory for key chips in 2019. With inventories now wafer-thin, a closure of a supplier’s overseas factory for more than a few days can cause them to exhaust their stockpile. The report said the lead time for delivery of some chips in particularly short supply has doubled to between 103 and 365 days. The Biden administration is pressing for funds for a plan to increase domestic chip production. But building a factory for the complex electronic products can take years. 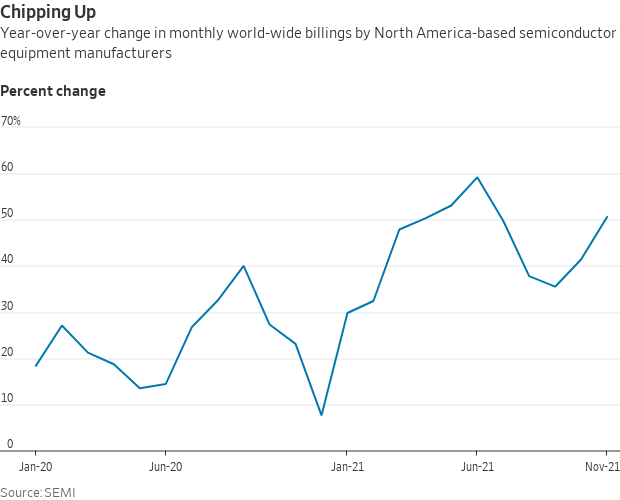 • Outside markets: The U.S. dollar index was higher with foreign rival currencies narrowly mixed against the greenback ahead of U.S. trading. The yield on the 10-year U.S. Treasury note was firmer, trading near 1.79%. Gold futures were lower and silver higher ahead of U.S. trading activity, with gold under $1,847 per troy ounce and silver above $23.95 per troy ounce.

• OPEC, Russian oil output falls short. OPEC and its Russia-led partners have promised to increase oil production to pre-pandemic levels this year but are falling short of those public commitments, stoking fast-rising global crude markets, the Wall Street Journal reports (link). Overall, the Organization of the Petroleum Exporting Countries (OPEC) and its Russia-led allies are pumping 790,000 barrels a day below their publicly stated targets, the International Energy Agency said. Instead of curbing prices, the group’s inability to increase as promised has become a reason for traders to bet on higher prices. 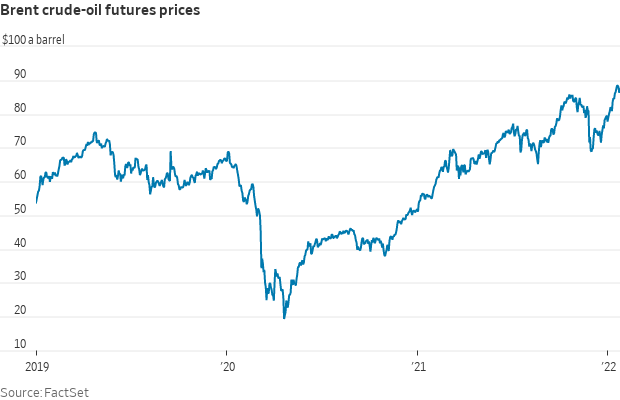 • Rapidly intensifying storm known as a bomb cyclone will likely dump large amounts of snow and ice across the Northeast and Mid-Atlantic this weekend. Strong winds and flooding are also in the forecast, which may impact travel.

• NWS weather: Snow over the southern Rockies/High Plains will spread toward Oklahoma tonight... ...Large temperature swings across the northern U.S. as arctic air moderate slowly over the eastern and southern U.S.... ...A low pressure wave will bring some showers and possibly thunderstorms across southern Florida today and into Thursday. 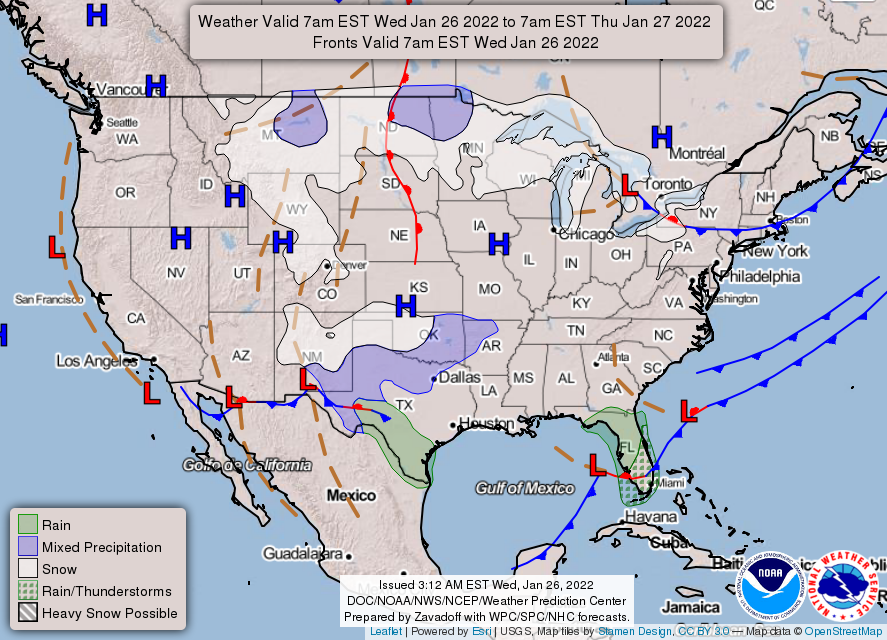 DOE said this action brings the total of SPR crude released or exchanged to nearly 40 million barrels, the second largest tapping of the SPR in history. Those receiving the oil via exchanges will return the amount of crude received with an additional amount that depends on the length of time they hold the oil.

—
— California court grants delay in Proposition 12 on pork. Sacramento Superior Court Judge James Arguelles announced that the rules under Proposition 12 will not take effect on sales of whole pork meat until 180 days after the final regulations are enacted, effectively putting the California rules covering square footage requirements for hogs on hold. The judge rejected the request that the provision not take effect until 28 months after the California Department of Food and Agriculture and California Department of Public Health finalize the regulations.

NAMI comments. “Judge Arguelles’ decision recognizes the complexity of the pork supply chain and the burdensome and costly provisions of Prop 12,” North American Meat Institute (NAMI) President and CEO Julie Anna Potts said. “To enforce the law without final regulations leaves the industry unsure of how to comply or what significant changes must be made to provide pork to this critical market.”

The National Pork Producers Council also welcomed the action, but General Counsel Michael Formica pointed out it is only a “temporary reprieve.” The California Department of Agriculture (CDFA) said they are looking at the ruling but are still enforcing the regulations on producers, but not retailers. “It should be noted that the judge’s ruling is a narrow one that applies only to retailers, including grocers, and not to pork producers providing pork products to California,” Steve Lyle, CDFA director of public affairs, said. “Pork producers and suppliers remain subject to enforcement if they violate the square-footage requirement that went into effect on Jan. 1.”

Attention now shifts to the U.S. Supreme Court which has not yet announced whether it will take up the challenge to Proposition 12. That case was relisted from the Supreme Court conference Jan. 14 and again on Jan. 21.

The letters cite stats for three of the companies on how much they have increased prices for beef or pork, but did not specify any figure for poultry relative to Seaboard. “The net income of all four companies has soared by 500% since before the pandemic,” the letters stated.

As for meat packer statements that higher input costs are a factor in the higher prices, the letter claimed that “earnings data tell a different story,” noting net profit margins are up “over 300%” since the start of the pandemic. “This demonstrates that higher prices consumers are forced to pay for beef, pork, and poultry, are not an inevitable byproduct of market forces in a competitive marketplace — instead, the evidence suggests that they are a choice companies have made to increase their profits over and above costs,” the letter said.

The companies are requested to provide documentation covering the period from Jan. 1, 2020, to the present by Feb. 8.

— Rep. Jim Cooper (D-Tenn.) announced he won’t seek re-election, following the state’s latest redistricting plan that would slice up his district. Cooper has held his seat in Congress since 2003. More from the Tennessean’s Melissa Brown and Adam Friedman. He’s the 29th Democrat to call it quits, the most since 1996.

— House Speaker Nancy Pelosi (D-Calif.) said she plans to seek re-election this fall, but not whether she wants to remain her party’s leader.

— NATO says there is still a diplomatic way out of the Russia/Ukraine crisis, but Russia must show it's ready to engage in good faith in political talks. Yesterday, Ukrainian Foreign Minister Dmytro Kuleba told CNN that Ukraine "will not allow anyone to impose any concessions" on his country as part of efforts to de-escalate the threat. The Kremlin denies it is planning to invade and argues that NATO support for Ukraine — including increased weapons supplies and military training -— constitutes a growing threat on Russia's western flank.

President Biden said he would consider personally sanctioning Russian leader Vladmir Putin, a threat which a Kremlin spokesman said would be tantamount to breaking off relations. Officially, Putin only owns an apartment and three cars. Russian Foreign Minister Sergei Lavrov signaled that Moscow would respond to any “aggressive” action by the U.S. and its allies.

HRW CCI rating drops to the lowest of the year, while the SRW rating improved to its highest of the spring.

Jim Wiesemeyer
May 16, 2022
Agriculture News
Soybean inspections near the top of trade expectations

Soybean inspections continue to run stronger than normal for this time of year.